How Common Is Celiac Disease?

Celiac disease, aka gluten enteropathy, affects one of every 133 Americans, according to the National Digestive Diseases Information Clearinghouse.  That’s much more common than we thought a couple decades ago.  Read about celiac disease symptoms and physical signs at About.com or the NDDIC link. 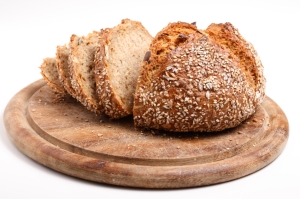 I read a few paleo diet/lifestyle blogs regularly.  In case you didn’t know, paleo diet advocates shun wheat and other grains.  Recent paleo converts often report how this or that symptom or physical condition improved when the dieter “went paleo,” often attributing the improvement to cutting out wheat products.   Wheat contains a protein—gluten—that causes disease in people who have celiac disease.  Other sources of gluten are barley and rye.

Click to see one definition of the paleo diet: http://paleodiet.com/definition.htm

If cutting out wheat from your diet improves or resolves bothersome medical symptoms, it makes me wonder if you have celiac disease.  Other possible explanations include placebo effect and coincidence.  And if you switch from a standard American diet to paleo, you’re doing more than just eliminating gluten.

I reviewed several sources for the prevalence of celiac disease in the U.S.  The best figure is one of every 133 residents.

Most countries have a prevalence of roughly one of every 350 citizens.  Prevalence varies by country and ancestry; celiac disease is at least twice as common in whites of northern European lineage.

Full-blown classic celiac disease is relatively easy for doctors to recognize, but that’s only the tip of the iceberg.  Adults more commonly have one or two milder, nonspecific manifestations such as fatigue, malaise, depression, malnutrition (especially low iron, folate, or vitamin D), neuropathy, belly pain, headaches, thin bones, diarrhea, or a rash.  I’m glad to see increasing physician and public awareness of gluten intolerance.  If it’s not considered as a cause of these symptoms, it’ll never be diagnosed and treated appropriately.

Celiac disease is being diagnosed more often because of the availability of blood tests that help us screen for it.  If you think you have celiac disease, consider getting one of two blood tests: IgA antibodies to tissue transglutaminase, or IgA endomysial antibodies.  If that test is positive and symptoms or physical signs suggest celiac disease, the next step is usually a small bowel biopsy.

Update September 13, 2011: A recent study of adult type 1 diabetics at a U.K. teaching hospital found celiac disease in three of every hundred cases.

Legumes and Whole Grains: Any Role in Diabetes?

Expert nutrition panels consistently recommend whole grains and legumes for people with diabetes.  Why?  And do these foods affect development of diabetes?  I found a pertinent scientific review article on the subject from 2004 in the European Journal of Clinical Nutrition.  Here are some pertinent quotes from the summary:

The role of legumes in the prevention of diabetes is less clear, possibly because of the relatively low intake of leguminous foods in the populations studied. However, legumes share several qualities with whole grains of potential benefit to glycaemic control including slow release carbohydrate and a high fibre content. A substantial increase in dietary intake of legumes as replacement food for more rapidly digested carbohydrate might therefore be expected to improve glycaemic control and thus reduce incident diabetes. This is consistent with the results of dietary intervention studies that have found improvements in glycaemic control after increasing the dietary intake of whole grain foods, legumes, vegetables and fruit.

. . . it is cereal fibre that is largely insoluble [rather than soluble fiber] that is associated with a reduced risk of developing T2DM.

Thus, there is strong evidence to suggest that eating a variety of whole grain foods and legumes is beneficial in the prevention and management of diabetes. This is compatible with advice from around the world that recommends consumption of a wide range of carbohydrate foods from cereals, vegetables, legumes and fruits both for the general population and for people with diabetes.

A major protein in wheat is gluten.  The last few years have seen the popular emergence of gluten-free this and gluten-free that.  The idea is that gluten causes a variety of gastrointestinal, immunologic, and other problems, so wheat products should be avoided.  Certainly they should be avoided in people with celiac disease, a well-established medical condition.  I follow a few paleo blogs and know that grains and legumes are not part of that way of eating: the paleos say we are not evolved optimally to process them.

If legumes or wheat or other grains cause problems for you, don’t eat them.  They have no essential nutrients that you can’t get elsewhere.

In my quest to develop a healthy Diabetic Mediterranean Diet, I’m finding that grains—compared to nearly all other carbohydrate-containing food groups—tend to have a higher glycemic index (GI).   A low GI is 55 or less.  High GI is 70 or greater.  Grains in general raise blood sugar levels higher than many other sources of carbohydrates.  But this is highly variable and depends partially on preparation of the grain.  Whole grain products have a lower GI than highly processed counterparts.  For instance, white bread has a GI of 70; whole wheat bread 67.  Regular spaghetti is 38.  Table sugar’s GI must be sky high, right?  No, its just 61.  A baked potato is a whopping 85.

Beans have a GI around 30 or 40.  And they pack a lot more fiber per serving.  For a diabetic struggling to keep blood sugars under control, which is a better choice: grains or legumes?  I’m leaning towards legumes and other components of a low-glycemic-index diet.

PS:  [Before you correct my GI numbers, please note I’m  aware that various GI lists don’t agree with each other.]