Here’s my review of Dr. Bernstein’s Diabetes Solution: The Complete Guide to Achieving Normal Blood Sugars, published in 2007.  Per Amazon.com’s rating scale, I give it five stars (I love it).

Dr. Richard K. Bernstein gives away thousands of dollars’ worth of medical advice in this masterpiece, Diabetes Solution.  It’s a summation of his entire medical career and a gift to the diabetes community.

The book starts off with some incredible testimonials: reversal of diabetic nerve damage, eye damage, and erectile dysfunction.  They’re a bit off-putting to a skeptic like me, like an infomercial.  Dr. Bernstein is either lying about these or he’s not; I believe him.  His strongest testimonial is his own.  He’s been a type 1 diabetic most of his life, having acquired the disease at a time when most type 1’s never saw 55 candles on a birthday cake.  He’s in his mid-70s now and still working vigorously.

I only found one obvious error and assume it’s a misprint. He writes that 95% of people born today in the U.S. will eventually develop diabetes.  That’s preposterous.  The U.S. Centers for Disease Control predicts that one in three born in 2000 will be diagnosed.

Dr. Bernstein delivers lots of facts that I can neither confirm nor refute.  He’s a full-time diabetologist; I am not. 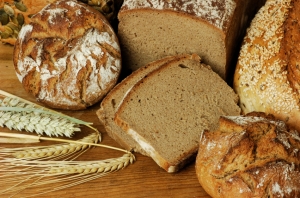 "Put down the bread and no one will get hurt!"

The central problem in type 1 diabetes is that, due to a lack of insulin,  ingested carbohydrates lead to spikes (elevations) in blood sugar.  The sugar elevations themselves are toxic.  The usual insulin injections are not good imitators of a healthy pancreas gland. So Dr. Bernstein is an advocate of low-carb eating (about 30 g daily compared to the usual American 250-300 g).  He says the available insulins CAN handle the glucose produced by a high-protein meal.

Dr. B reminds us that insulin is the main fat-building hormone, which is one reason diabetics gain weight when they start insulin, and why type 2 diabetics with insulin resistance (and high blood insulin levels) are overweight and have trouble losing weight.  You can have resistance to insulin’s blood sugar lowering action yet no resistance to its fat-building (fat-storing) action.  Insulin also stimulates hunger, so insulin-resistant diabetics are often hungry.

“Carbohydrate counting” is a popular method for determining a dose of injected insulin.  Dr. B says the gram counts on most foods are only a rough estimate—far too rough.  He minimizes the error by minimizing the input (ingested carbs).  From his days as an engineer, he notes “small inputs, small mistakes.”

Dr. B also cites problems with the absorption of injected insulin.  Absorption is variable: the larger the dose, the greater the variability.  So don’t eat a lot of carbs that require a large insulin dose.  For adult type 1 diabetics, his recommended rapid-acting insulins doses are usually three to five units.  If a dose larger than seven units is needed, split it into different sites.

He recommends diabetics aim for normal glucoses (90 mg/dl or less) almost all the time, and hemoglobin A1c of 5% or less.  This is extremely tight control, tighter than any expert panel recommends.  He says this is the best way to avoid the serious complications of diabetes.

Here’s a smattering of “facts” in the book that made an impact on me, a physician practicing internal medicine for over two decades.  I want to remember them, incorporate into my practice, or research further to confirm:

His has four basic drug treatment plans, tailored to the individual.  They are outlined in the book.  Dr. B provides detailed notes on what he does with his personal patients.

Disclosure:  I was given nothing of value by Dr. Bernstein or his publisher in return for this review.