A Whole Grain Food Isn’t What You Think

Now THIS is whole grain

Do you know what a whole grain food is? I thought I did. I was wrong. Here’s the definition in a 2013 article in Scientific American:

The term “whole grain” might evoke an image of a whole, intact grain—that is, a fiber-rich coating of bran surrounding a starchy endosperm and a small reproductive kernel known as the germ. But in a definition created in 1999 by the American Association of Cereal Chemists (AACC) International, an organization of food industry professionals and scientists, and adopted by the U.S. Food and Drug Administration in 2006, “whole grain” refers to any mixture of bran, endosperm and germ in the proportions one would expect to see in an intact grain—yet the grains can be, and usually are, processed so that the three parts are separated and ground before being incorporated into foods. (Refined grains, on the other hand, are grains that have been stripped of their bran and germ.) For a food product to be considered whole grain, the FDA saysit must contain at least 51 percent of whole grains by weight. Compared with intact grains, though, processed whole grains often have lower fiber and nutrient levels.

Many of the scientific studies that support the healthfulness of whole grains, and there aren’t many, considered wheat germ and bran cereals as whole grain foods. But those are only parts of a whole grain. The studies that linked lower heart disease and type 2 diabetes with whole grain consumption were diets high in fiber or bran as a whole grain.

Read the whole article (it’s not long) to find out how modern processing of whole grains can reduce their healthfulness. 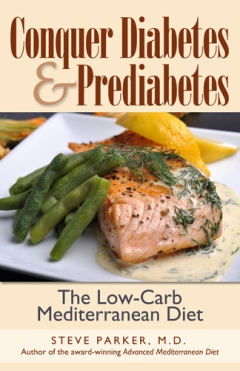 Click pic to buy book at Amazon.com in the U.S.