Final product without Parmesan sprinkles. That’s sous vide chicken in the foreground, making this a complete meal for me.

At my request, my wife bought me a mess o’ Brussels sprouts, and I’ve been experimenting with recipes. 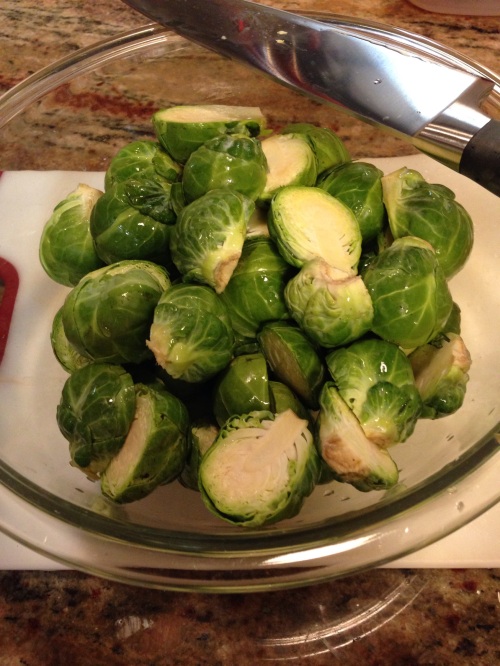 Sprouts sliced in half

Ingredients this time are the sprouts, dried rosemary (i.e., not fresh although it grows where I live), salt, pepper, extra virgin olive oil, fresh garlic, and diced onion.

FYI, rosemary is used as an ornamental landscaping plant in southern Arizona.

To promote release of flavor, I sautéed three garlic cloves and the rosemary in EVOO.

Then I sliced the sprouts in half along their long axis, to reduce cooking time. (Cut them so the leaves stay attached to the internal stalk.) You’d have to cut them in half before you eat ’em anyway.

I dumped all ingredients into a bowel and mixed thoroughly to ensure the sprouts were coated with oil. 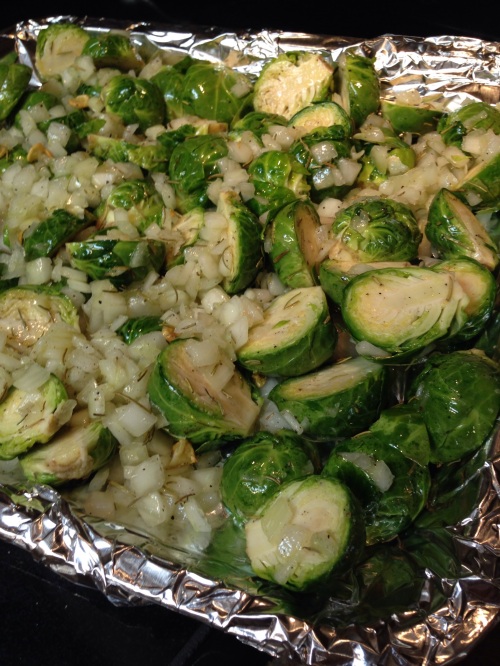 Ready for the oven. I used about 3/4 cup of diced onion.

Everything except the bowl was transferred to a cooking sheet covered with aluminum foil (easy clean-up!), which I then popped into an oven pre-heated to 425°F. I cooked for 25 minutes. At around the 10 and 17-minute marks, I pulled the concoction out of the oven and stirred/flipped the ingredients to promote even cooking and browning. Your cooking time will vary from 17 to 25 minutes depending on your preferences. If you want some browning of the sprouts, you likely need to cook longer than 17 minutes. Unless your oven runs hotter than mine.

This is my favorite roasted Brussels sprouts recipe thus far. For an extra flavor zing, sprinkle with some Parmesan cheese just before eating. In the future, I may  top the ingredients with some other type of cheese a minute before the cooking is completed. Bacon bits are another tasty option.

Not “real” Parmesan from the Parma region of Italy. For example, this one contains cellulose “to prevent caking.”