I Lost My Virginity at an Indian Restaurant

Tonight I ate at my first Indian restaurant, Chennai Chettinaad Palace, at 2814 W. Bell Rd., Phoenix AZ 85053. This post isn’t a restaurant review, however. It’s a thumbnail sketch of my introduction to Indian food.

We ended up here because it was recommended to my wife by an Indian gentleman she happened to sit next to on a plane trip. The restaurant has an extensive menu of what they say is authentic North Indian, South Indian & Gujarati food, both vegetarian and non-vegetarian.

We arrived at 6:40 PM and there were few patrons present. One hour later the place was full of apparent Indians.

Two of us started out with, and enjoyed, an appetizer called Gobi Manchurian.

It would have been too spicy for my third dining mate, who simply ate garlic naan (bread) and vegetarian fried rice. Both were delightful, although the rice was a tad oily. The rice dish easily serves four diners. The naan is addictive; split an order with your mate or you’ll eat too much.

My main entree was Chicken Kolhapuri. I was forewarned it would by spicy hot. I enjoyed it. My wife wouldn’t dare taste it. I’d get it again. I dipped my naan in the copious chicken sauce (a curry?). 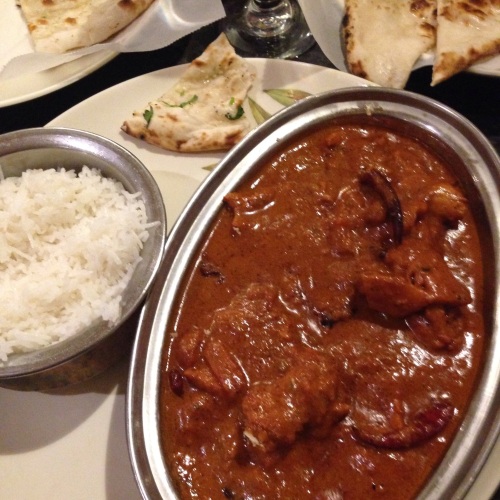 Brian ordered Chicken Tikka Masala but didn’t like it. I don’t think it was bad; it just didn’t suit his taste, the way some folks don’t like asparagus.

We finished with an ice-cream style dish. If you want ice cream, stop at Baskin-Robbins on your way home.

Service was good. Our waitress was patient with us Indian food virgins. If you’re not familiar with Indian food, you won’t make sense of much of the menu. The restaurant was too cold for my wife, but fortunately she had brought a jacket. The bill for three of us was $63.42 (USD). We brought home two platefuls of leftovers.

I’ll visit again. I’m interested in vegetarian dishes, lamb, goat, and seafood. The secret to Indian food may be in the spices.

The rice, naan, and desert have too many carbohydrates for many diabetics. I’m sure there are low-carb alternatives, even if you have to make them yourself.

PS: The restaurant offered a 10% discount for customers paying with cash instead of credit. I always thought the credit card companies cut of credit card payments was only 3-4%.

5 responses to “I Lost My Virginity at an Indian Restaurant”