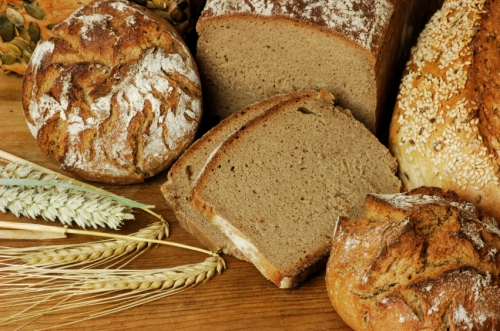 “Put down the bread and no one will get hurt!”

ABC Radio provides the audio and transcript of an interview with Dr. Troy Stapleton, who was diagnosed with type 1 diabetes at age 41. Dr. Stapleton lives in Queensland, Australia. At the time of his diagnosis…

I was advised to eat seven serves of bread and cereals, two to three serves dairy, fruit, starchy vegetables, and to balance that intake with insulin. If you add up all those serves, they were recommending a diet of up to about 240 grams of carbohydrates a day, and to balance it with insulin. I was going to be the best patient, and there has been some important trials that show that if you do control your blood glucose well then you can reduce your incidence of the complications.

Dr. Stapleton believes we evolved on a very low carbohydrate diet; the Agricultural Revolution led to our current high carb consumption. He was concerned about the risk of hypoglycemia with standard diabetic diets.

There was a different approach where essentially you went on a very low carbohydrate diet, this made a little bit of sense to me. Why would I eat carbohydrates and then have to balance it with insulin?

Here’s what the diabetes educators told him:

And then of course it changes with what you’ve eaten. So if you eat carbohydrates with fat and then you get delayed absorption, then that glucose load will come in, and then the type of carbohydrates will alter how quickly it comes in to your bloodstream. And then of course your insulin dose will vary, your absorption rate will vary by about 30%. Once you think through all the variables, it’s just not possible. You will be able to bring your blood glucose under control, but a lot of the time what happens is you get a spike in your glucose level immediately after a meal, and that does damage to the endothelium of your blood vessels…

Troy Stapleton: That’s correct, it causes an oxidative stress to your endothelium, and that is the damage that diabetes does, that’s why you get accelerated atherosclerosis.

Here’s what happened after he started eating very low carb:

It’s been amazing, it’s been the most remarkable turnaround for me and I just cut out carbohydrates essentially completely, although I do get some in green leafy vegetables and those sorts of things. My blood sugar average on the meter has gone from 8.4 [151 mg/dl] down to 5.3 [95 mg/dl]. My HbA1c is now 5.3, which is in the normal range. My blood pressure has always been good but it dropped down to 115 over 75. My triglycerides improved, my HDL improved, so my blood lipid profile improved. And I would now have a hypoglycaemic episode probably about once a month after exercise. [He was having hypoglycemia weekly on his prior high carb diet with carb counting insulin adjustments.]

He was able to reduce his insulin from about 27 units a day down to 6 units at night only (long-acting insulin)! He admits his low insulin dose may just reflect the “honeymoon period” some type 1s get early on after diagnosis.

Norman Swan: So when you talk to your diabetes educator now, what does he or she say?

He says he’s eating an Atkins-style diet. Combining the transcript and his notes in the comments section:  1) he doesn’t eat potatoes or other starchy vegetables or bread, 2) he eats meat, eggs, lots of starchy vegetable, some berries and tree nuts, olives, and cheese, 3) an occasional wine or low-carb beer, 4) coffee, and 5) he eats under 50 g/day of carbohydrate, probably  under 30 g. This is a low-carb paleo diet except for the cheese, alcohol, and coffee.  Cheese, alcohol and coffee are (or can be) low-carb, but they’re not pure paleo.

There is an adaption period to a very low carbohydrate diet which takes 4-6 weeks (ketoadaption). During this time symptoms include mild headaches, lethargy, cramps, carb cravings and occasional light headedness. These symptoms all pass.

Read or listen to the whole thing. Don’t forget the comments section. All the blood sugars you see there are in mmol/l; convert them to mg/dl (American!) by multiplying by 18.