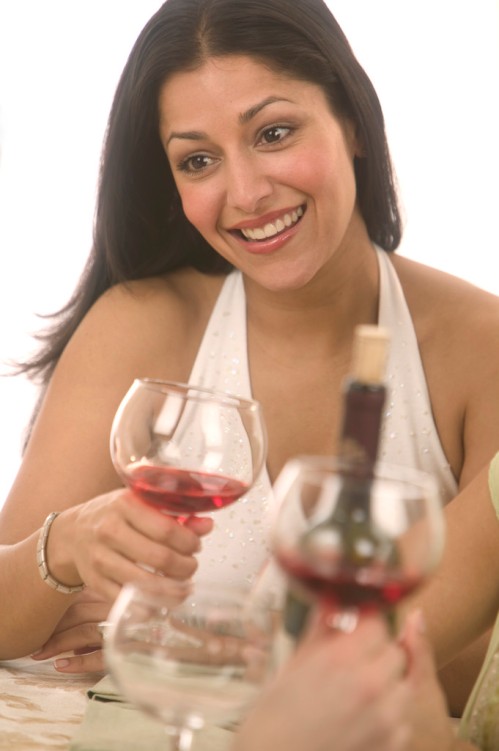 "Is the room spinning, or is it just me?"

Wine consumption lowered fasting blood sugar levels by 15% in type 2 diabetics who had previously not been habitual drinkers, according to a 2007 study in Israel.

Judicious alcohol consumption is linked to lower rates of cardiovascular disease (heart attack and stroke), longer lifespan, and lower risk of developing type 2 diabetes.  The beneficial health effects of alcohol seem to be more pronounced in people who already have type 2 diabetes.

Israeli investigators wondered how initiation of an alcohol habit would effect fasting and after-meal blood glucose levels in type 2 diabetics.

Researchers studied 109 type 2 diabetics (41-74 years old)  in Israel who previously had abstained from alcohol.  They were randomly assigned to drink either 150 ml (5 oz) of wine or nonalcoholic diet malt beer (as a control) during dinner daily for three months.  Wine choices were a dry red (Merlot) or white (Sauvignon Blanc).  Three out of four chose the Merlot.

Use of anti-diabetic medications was not reported.  People using more than two insulin injections daily or an insulin pump were excluded from participation.

There was no difference between the groups in glucose levels measured two hours after dinner.

In the wine group, 5% reported low blood sugar, headaches, or weakness, and 8% reported increased sexual desire.  But these numbers were not statistically significant compared to the control group.

The wine group reported an improved ability to fall asleep.

Three months after the end of the study, 61% of the wine group said they thought the alcohol was beneficial to them, and half of the group continued to drink in moderation.

Among patients with type 2 diabetes who had previously abstained from alcohol, initiation of moderate daily alcohol consumption reduced FPG [fasting plasma glucose] but not postprandial glucose.  Patients with higher A1C may benefit more from the favorable glycemic effect of alcohol.  Further intervention studies are needed to confirm the long-term effect of moderate alcohol intake.

The investigators imply that the various types of alcohol – beer, wine, spirits (whiskey, vodka, gin, etc) – will have the same effect on fasting glucose levels.  The study at hand provides no evidence except for wine.

Some type 2 diabetics have fasting glucose levels routinely as low as 80 mg/dl.  If they start drinking wine like this, dropping their fasting glucose to around 6o or less, they could end up with symptomatic hypoglycemia in the mornings, or even hypoglcymia while asleep.  Use caution.  I’ve read other studies indicating that hypoglycemia usually is not a problem with light to moderate alcohol consumption.

The potential adverse health effects of alcohol are well-documented elsewhere, as are other reasons not to drink.

Diabetics who are diet-controlled, or on diabetic medications that don’t cause hypoglycmia by themselves, are unlikely to develop hypoglycmia with wine or other alcohol.

Wine has significant potential to prolong life and reduce rates of cardiovascular disease in type 2 diabetes.  It will be years, if ever, before we have confirmatory studies.  Who’s going to pay for the research?  The California Winegrowers Association?